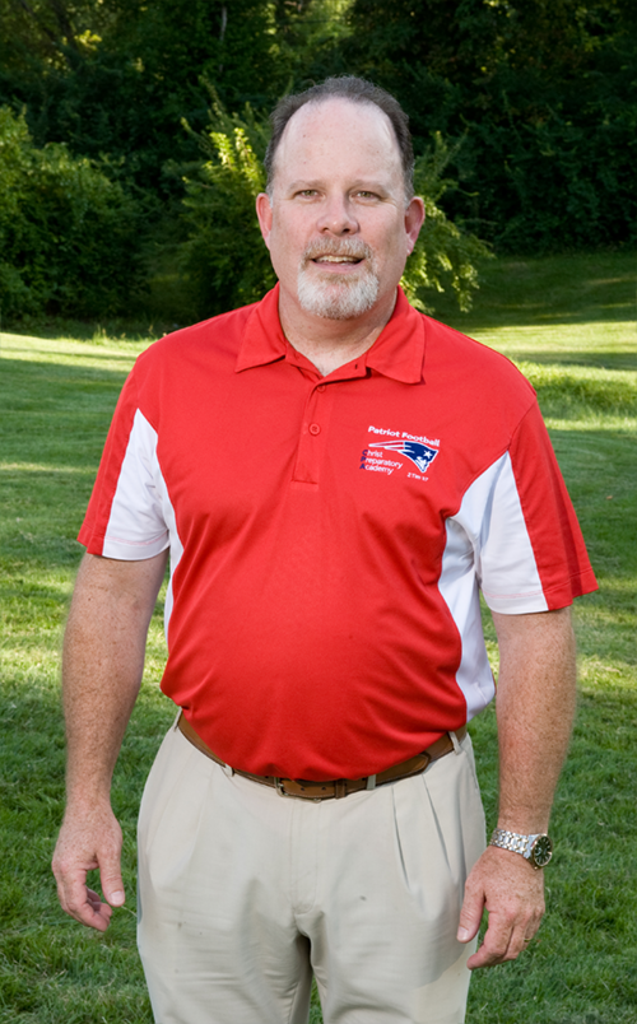 Tom Hurley believes that many sports are great for teaching character, but football is unique. “The physical and mental adversity that a player faces in football provide unique teaching opportunities for what these young men will face later in life,” Hurley said. “The required daily Bible reading is also unique to our program. Our hope is that it becomes a habit not only during the football season but that it carries over for the rest of their lives.”

Hurley started playing football in the ninth grade, and by the end of high school, he claimed an impressive list of accomplishments, including: State of Colorado Class A 8- Man, First Team All-State Offensive Guard, and First Team All-State Defensive End. He was the only player in his school’s history to be All- State on both offense and defense. He credits his high school coach, Larid Crump, for any success he had as a player and more importantly, who he is as a man today. Hurley became a coach when his oldest son started playing football. At that time, the family was living in Oklahoma City. He coached his son’s junior high homeschool team for three years and the varsity team for one year. In 2011, the family moved to Kansas City for his work, and he began to search for a football team for his son. “I Googled ‘Homeschool Football Kansas City’ and found a couple of options,” Hurley said. “Through reading the Christ Prep website I knew this was the one.”

Hurley took over as head coach for the junior high in 2012 after serving in the equipment trailer for one season, and he is entering his fourth year as head coach for varsity. Hurley and his wife of 30 years, Heidi, have nine children ranging in age from 9 to 27 and now one grandson. He is certain that Heidi has a direct impact on the Christ Prep program. "My ability to coach is directly tied to her loving support of me and this ministry to these young men.” Hurley said. “Her willingness to do everything at home when I am not there is what makes it possible for me to coach; this includes caring for my Mom who lives with us and has MS.” As a coach, he is most proud of the players and coaches that have helped the program to reach the pinnacle of the homeschool football world by winning the 2018 NHFA & NHFCS national championship. "This was years in the making and many players and coaches helped to build the program the right way which enabled us to achieve this milestone" Hurley said. His overarching goal has always been to be the best homeschool football program in the country - both from a spiritual standpoint and in terms of football play."

"I believe God wants us to do everything with excellence for His Glory!"